Apilado (pron: Ahh-Pee-Lah-Do), sometimes erroneously you will see this word spelled as ‘Apillado‘, but is pronounced as Ahhh-Pee-Sha-Do. The latter is an erroneous and bastardized (ahem) version of the word. In short, this word, Apilado, is the past participle of the verb ‘Apilar’, which means ‘to pile up’ or ‘to put in a pile’. From a Tango perspective, it means to put one’s body onto another, or to place your body onto another persons body. Over the last 3 or 4 decades in tango’s resurgence in popularity, the invocation of this idea has become an ‘iconic’ look of tango. In short, Apilado, has come to mean “a leaning bodies that form an “A” frame between the partners”.

While the idea of Apilado had been around for a long time, the idea of the ‘A’ frame way of dancing was made very popular by Maestro Carlos Gavito when he was El Capitan of the traveling Tango show “Forever Tango” in the 1990’s. It was for effect only, not as a way of social dancing. It was, in the way that Carlos showed it, a way to dramatize his point and artistry over the form. Never, ever, was it meant as a way of dancing socially at a Milonga in the line of dance. Ever. Not. (ahem) Now and again it can be quite useful, but not as a constant! Not unless you like driving or being driven around as if you were a ton of bricks! Truthfully, though, there is always a tiny, small, amount of apilado going on, very, very, very small…VERY small, like as in 1 to 1 millimeters, if that! More than that and you are just asking for trouble on a whole bunch of levels.

get all the goodies and register, it’s free!

Have you seen Dancing In A Small Space (DIASS) ? If you’re planning to dance at a Tango Marathon, Festival, Encuentro, Buenos Aires, or your local Milonga is a very crowded and you want to know how to dance well in a small crowded space, then this video is the key to that process.

See > Dancing In A Small Space

From one errneous perspective, it is an ‘embrace’. This is not inaccurate. A more accurate way of looking at it, it is a stance. A way of standing or creating a base from which to move from. Sometimes this is done to the extreme for effect to accentuate the Look of Tango, as shown by Gavito, or more importantly the dramatic effect of the musical crescendo.

A question that comes up for some folks is this: “Is this Argentine Tango ?”. And the answer is a qualified “No”.  It’s qualified ‘no’ because for some people this is their perception of what encompasses Argentine Tango. This laying body on body in the extreme. So we have to include this in the definition. 🙁 However, most of us that dance socially, day-in and day-out, thankfully, this is not Argentine Tango.

Truthfully almost no one actually dances like this socially. Why ? a.) it’s uncomfortable as all hell on multiple levels when done to the extreme, and improperly, in some cases. b.) it takes up an inordinate amount of space within the line of dance and does not work on crowded floors. c.) it’s generally performed improperly and invariably there’s an injury, usually for the Follower! and last but not least d.) when Gavito died it fell out of fashion. Can this form or style of the dance be used in the line of dance ? Yes, but only if there’s lots of space for it. Does it need to be a constant ? No.

There’s one reason why Apilado is touted, and mistakenely so, as useful, and that’s “to feel your partner”. The problem with this line of reasoning is that you don’t actually need it for that purpose. It’s not to feel the partner. It’s so that there is a tiny bit more of physiological contact between the partnership so that the embrace structure and the walking structures can work. There is a sweet spot of Social Apilado. Too much of it and you’re venturing into Gavito territory. Too little of it, and you’re vertical and you’ve got other issues going on. Think of Social Apilado as a little lean forward and nothing more than that. Both partners must invoke it in order for things to function properly, but again…there is a sweet spot for this to happen. Finding it is sometimes difficult for the beginner dancer, but for the advancing dancer it becomes easier and easier with time and then almost second nature. One issue that crops up because of Social Apilado is that Leads tend to end up “Watching The Follower’s Feet” and for both parties, it’s Head Tilt (forward, back, or to the side). 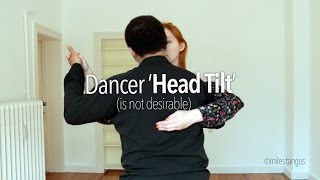 Have you seen our Full Musical Course ? It covers the Beat, On Beat, Off Beat, The 5 Musical Pauses, Tango Music History, What to Listen for, How to Listen, and includes 14 Days of Tango Music, then 30 Days of Intensive Music, and more! For Leads & Followers! Take Your Musical Understanding To A Whole Other Level!

bob was mr. boleo. he subscribed. now he walks & his partners love him.

Social Apilado ? WTF is that ? It’s the tiny form of Apilado, it’s a bit more lean forward for both partners that can be used at the Milonga, in the line of dance. The reason it’s called “Social Apilado” is because it’s only used IN the line of dance and very sparingly and in a very small space for maybe a step or two. If that. The reason ? You don’t have space or time. Truth be told, just a small amount of Social Apilado is preferred and is most certainly felt by the partnership.

Learn > The Six Ways of Walking

mark found the habanera in gold madness. you can too! 🙂

There are a lot more Technique Articles on Tango Topics than you can see right now, because you're not logged in :-(

just go to this URL and check out the free, live class.

Get Milonga Madness with Detlef & Melina for just $44.99

This is the last year of Tango Topics. On Jan 1st, 2021 the site will go dark. No more Tango Topics. :-( However, if you would like to own the entire tangotopics.com library, including all the articles, and all the content. You can! You can purchase the entire thing for one price!